Scroll through some Wiltondale photos dating back the 1920s!  These photos were all taken by the original owner of 610 Sussex Road during and shortly after its construction.  In two of the photos, you are able to see Wiltondale’s signature Oak in the background on Yarmouth Road.  Look for the photos dated September 11, 1927 (man sitting on the home’s stone foundation) and March 15, 1932 (cat walking towards you).

(Copied from the Wiltondale Booklet, 1985) 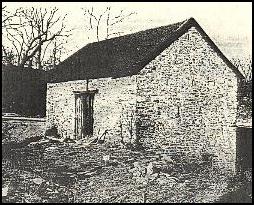 Charles Calvert, the third of the Lords of Baltimore, dipped his quill into the inkpot, scratched his name on the charter, and the Stevenson family came into possession of the land they then held for the next 200 years, passing it down from generation to generation. On this land, heretofore, inhabited only by wildlife and the warlike Susquehannock tribe, the earliest Stevensons established their manor house and estate in 1690. This they called “Fellowship.” Most of the southern part of Towson, from the Towson High School to Eudowood to Hillen Road to Stoneleigh School, is located on it. So is most of Stevenson Lane, probably once the farm lane, and now one of the longest of all the streets in the County seat. The grant bordered on other tracts called “Friends Discovery” and “Illwill.”

There were Nicholas Stevenson, Joshua Stevenson of Henry, Washington Stevenson, Josias Stevenson, John Stevenson, and, lastly, Edward Stevenson. When Joshua died, not many years went by before pieces of Fellowship began to be broken off and divided among family members or sold to developers and seekers after the quiet country life. In 1899, some 112 acres along York Road were sold by Frances Stevenson, daughter of Edward to William S. Hilles and Bessie Wilson Hilles.

In 1915, from the Hilles family, Wilton and Jessie Hilles Greenway acquired the property. Here Mr. Greenway, recognized as an excellent trainer and sulky driver, established a horse farm principally for pasture and breeding and training of trotters. Just off Cedar Avenue, then a part of Old York Road, was a half-mile sulky racing track. The main stable, large enough to accommodate 30 horses, was in the area of Cedar Avenue and Worcester road. The Greenway estate house itself was situated in a plot that was located between Cedar Avenue and Aintree Road. A second barn for the shelter of a small herd of dairy cattle stood on what is now 621 Coventry Place facing a springhouse across the triangle. A house for Mr. Fishpaw and family, caretakers, was located on what is now 625 Coventry Road.

When their home burned to the ground in the late 1920’s, the Greenways decided to subdivide the property for residential development. Curiously, the new community, “Wiltondale,” derived its name from a thoroughbred trotting horse stabled at this stud farm.¹ Bred in Lexington, Kentucky, the trotter WILTONDALE was foaled in 1902. He was by the sire ABDELL out of the dam MANTUA MAKER. WILTONDALE ran exclusively in the State of Maryland during the years 1905 and 1908, racing from Mr. Greenway’s stables at Hokeland, Maryland, near Havre de Grace, and competing at Bel Air, Baltimore, Timonium, and Hagerstown. Obviously, he was a favorite of the Greenways, yet records show that his racing career was unspectacular.¹ The classes in which he was assigned and the purses for which he competed were both below average. WILTONDALE was no more distinguished as a sire. He sired 15 trotters and 5 pacers who raced from 1908 through 1921. The fastest of these was a pacing mare, BELLE WOODFORD, whose best time was 2:11½.² By the time the Greenways became owners of the York Road farm in 1915, WILTONDALE’S racing days were over. He was then brought to the new location for pasture and stud purposes, his name being adopted for the farm.

Developing the first section of Wiltondale, the Southland Hills Company used Spanish names for the streets, such as San Pierre Drive and San Sebastian Drive. These later were renamed Sussex Road and Wilton Road, respectively. English street names were introduced throughout the community as the Roland Park Company took over engineering and general layout at the second phase of development. Among the builders in the community were James L. McGraw & Sons, Raymond A. Arnold, and C. Albert Merritt & Company, accounting for the variety of architectural style. Wiltondale was developed in three sections, and there are slight variations in deed restrictions for these. The community, as we see it now, was complete by 1952 and consists of more than 350 homes.

The huge white oak (Quercus alba) at 514 Yarmouth Road is Wiltondale’s last natural landmark of the original tract. In 1976, the Maryland Forest Service judged this oak to be among Maryland’s 300 oldest trees of all varieties and included it in its “Bicentennial Trees,” a listing of trees believed to be living in Maryland in 1776. After test borings, the Forest Service certified that the tree was older than 260 years. Its dimensions were given as: girth, 15 feet, 6 inches; height 80 feet; spread, 90 feet. The test also revealed that the tree survived an apparent forest fire many years earlier and that the scar was completely healed.

During a lull in the homebuilding trade in the 1930’s, part of Wiltondale was converted to a golf driving range. From approximately the location of the former main barn, practice tees faced easterly with the large white oak a distant potential target. Worcester and Yarmouth Roads were yet to be opened. 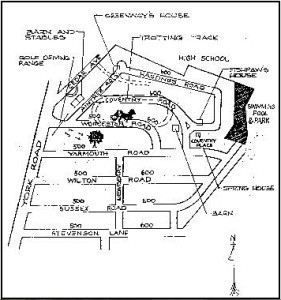 The planners and builders of Wiltondale were determined to construct quality homes in attractive and charming surroundings. It is a tribute to their foresight that Wiltondale today is considered one of the most desirable communities in which to live. There are no through streets, and many sections give the appearance of a pleasant English village, with street names like Sussex, Aintree and Coventry giving it a flavor of racing that is its heritage.

The community is especially indebted to Raymond A. Arnold and W. Herbert Cypull who saw the need for neighborhood recreational facilities and generously furnished serviced and conveyed to the Improvement Association the acreage that now accommodates the swimming pool, playground, and picnic areas. The L-shaped pool and its parking area were completed and opened for use on the fourth of July, 1956.

The old stone house at 2 Cedar Avenue (not officially part of Wiltondale) dates to about 1860. Known for a while as “Barking,” it once served as a gatehouse for Aigburth Vale, the estate of John E. Owens, famed actor-comedian (1823-1886).

Keep up with Wiltondale! View the current newsletter or peruse previous editions to learn more about our neighborhood. Join our email list to receive information and COP security alerts.

We are proud of our neighborhood swim team!

Learn more about how to join the team and support our kids at the home and away meets. Go Warriors!